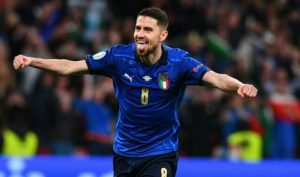 Meanwhile, Antonio Cassano has revealed that Chelsea and Azzuri midfielder Jorginho agreed with his opinion that it would be a “scandal” if he won the Ballon d’Or ahead of Lionel Messi.

Jorginho chooses to be  favourite to win the prize after playing a major role in Italy’s Euro 2020 triumph as well as Chelsea’s Champions League win.

But the former Azzurri striker has claimed the midfield star agrees that the award should always go to Messi.

“Remember when I said any journalist who voted for Jorginho as Ballon d’Or should have his licence taken away?” Cassano asked Christian Vieri on his Twitch channel.

“Well, I was in Formentera with my family and just as I sat down, I felt a touch. ‘Antonio, you’re great!’ the voice says. I turn around to ask who he was, he took off his glasses and mask, and it was Jorginho!

“I told him, Jorgi, can you believe the scandal if they should give you the Ballon d’Or and not to Messi? He replied that he absolutely agreed with me, Messi should always win it.

“Now I admire Jorginho even more. We were talking for a good 90 minutes. He is an exceptional guy, very intelligent, humble and polite.”

Though Cassano claims Jorginho admitted he doesn’t deserve the prize, the midfielder himself said last month,

he could be considered if voters prioritise trophies.

“We all have dreams,” Jorginho said “But, I’ll be honest, it depends on the criteria that the decision is based on.

“If we’re talking about talent then I know I’m not the best in the world. But if it’s going on titles, then nobody has won more than I have this season.

“How could I compare myself to Messi, Neymar or Cristiano Ronaldo? They’ve got completely different characteristics to me. But, I repeat, it depends on the criteria.”