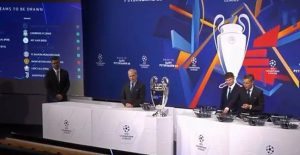 Champions League last-16 draw has been subject to some controversy and Atletico Madrid were at the heart of it, as they originally drew Bayern Munich.

Atletico saw that UEFA’s delegates took out the Liverpool ball and not the Manchester United one, showing the red of United and the green of Liverpool, which should have been the opposite.

Since Atlético have notified UEFA of this, the original draw has been declared void.

UEFA were quizzed by Atlético in the immediate aftermath of the draw.

A video circulated on social media of the UEFA official choosing the Liverpool ball and not Manchester United’s, which could have affected the draw.

As a result, it was the Bayern ball that was drawn for Atlético to play them.

Due to this, the draw will have to be redone.

Bad day at the office for UEFA

An error had already occurred earlier in the draw, when Villarreal drew their group rivals Manchester United.

On this occasion the error was solved and the draw was repeated, but UEFA was again at fault for the Atletico draw.

Real Madrid were originally drawn against Benfica in the first draw, which will now have to be redone.

The Spanish sides will have their attention on the redraw to find out if their fate has changed for the Champions League’s round of 16.