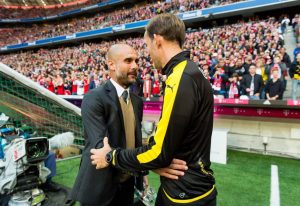 “We will build a team that nobody wants to play against.”

Those were the words of Thomas Tuchel shortly after he arrived at Stamford Bridge.

It’s fair to say he did it quicker than anyone expected.

Whil Manchester City boss Pep Guardiola knows it more than any other.

Pep has lost every single match he’s faced Tuchel’s Chelsea since he arrived in England.

And none more important than the last time the two tacticians faced up.

The German outwitted Pep as Chelsea defeated Manchester City 1-0 in the,

Champions League earlier this year to seal his first trophy with the west London club.

That came after after a 2-1 win at the Etihad and an FA Cup semi-final victory at Wembley.

Tuchel hasn’t always had it easy against Pep, though.

In Germany, whilst at Dortmund and Bayern Munich respectively, Pep often got the better of his new managerial rival.

Pep vs Tuchel: The story so far

In their five match-ups in Germany, Pep defeated Tuchel on four occasions, including on penalties in the final of the DFB-Pokal in 2016.

It’s been very different in England and Tuchel has seemingly learnt from from his losses to become a genuinely world-class coach.

The Chelsea side he has revitalised serves as evidence for that.

The Blues look unstoppable at the moment, with £97.5million man Romelu Lukaku banging in the goals on his return to the club. 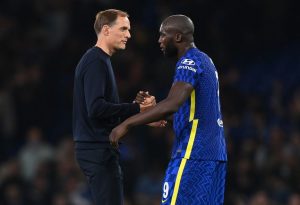 Their defence has also been the best in world football since his arrival,

with the club extraordinarily picking up more clean sheets (15) than they have conceded goals (14) in the Premier League under Tuchel.

Guardiola attempted to change it up by using neither Rodri or Fernandinho in the Champions League final defeat.

Only time will tell whether he has another trick up his sleeve for Saturday’s blockbuster clash.