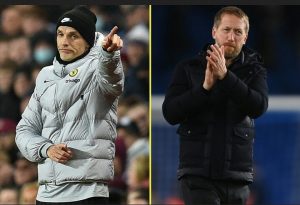 Chelsea will be desperate to keep the pressure on Premier League title rivals Liverpool and Manchester City when they face Brighton on Wednesday night.

The Blues came from behind to secure a vital 3-1 win over Aston Villa on Boxing Day, while Graham Potter’s side eased to a 2-0 victory over Brentford.

However, Chelsea – who were already suffering with a succession of absentees – saw Thiago Silva and N’golo Kante forced off with injuries at Villa Park.

Thomas Tuchel’s men, though, do return to Stamford Bridge for the first time in four in all competitions having only lost one Premier League home game this season.

This Premier League clash will take place on Wednesday, December 29.

It will be held at Stamford Bridge and will kick off at 7:30pm.

Chelsea are set to miss both Silva and Kante following their Boxing Day injuries, with the pair joining long-term absentee Ben Chilwell on the sidelines.

COVID-affected German duo Kai Havertz and Timo Werner both remain doubts but Ruben Loftus-Cheek may be in line for a return.

Romelu Lukaku should be in line to start up front after his second-half exploits as a substitute in the win over Villa.

Brighton are sweating on the fitness of Leandro Trossard following the Belgian’s withdrawal against Brentford with a tight hamstring.

The Seagulls are already without Jeremy Sarmiento, Lewis Dunk and Steven Alzate for the trip to London.

Joel Veltman is also a doubt but influential midfielder Yves Bissouma is back from a ban to reclaim his spot in the middle of the park.