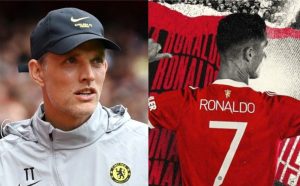 Thomas Tuchel’s Blues have been superb so far this season and smashed Leicester last weekend to stay top of the table.

United, meanwhile, have had a torrid few weeks and parted ways with Ole Gunnar Solskjaer after last Saturday’s horror-show at Watford.

Michael Carrick is in temporary charge of the Red Devils and he helped them hit back in midweek with a Champions League win over Villarreal.

But facing in-form Chelsea at Stamford Bridge will be a huge challenge for a United side who will still be struggling for confidence.

The Premier League clash is set to take place on Sunday, November 28.

It will take place at Stamford Bridge with a kick-off time of 4:30pm.

These two drew both their meetings 0-0 last season.

Ben Chilwell looks set to be out for several weeks following his injury in midweek.

N’Golo Kante also hurt his knee against Juventus and will need to be assessed.

Mateo Kovacic remains out while Kai Havertz has a slight hamstring issue.

Romelu Lukaku should be fit to start.

For manchester United,  Harry Maguire is suspended following his red card against Watford while fellow centre-back Raphael Varane remains out.

Paul Pogba is also injury while the club will need to check on Luke Shaw, Mason Greenwood and Edinson Cavani.

Donny van de Beek and Anthony Martial are among those pushing for starts.