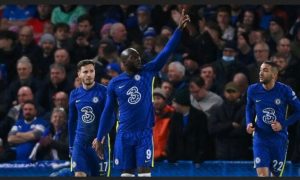 Chelsea predictably outclassed battling National League side Chesterfield to cruise into the FA Cup fourth round with an emphatic victory at Stamford Bridge.

In an atmosphere wonderfully enhanced by the noisy and colourful presence of around 6,000 Spirites fans.

The Champions League holders stamped their class on proceedings immediately to illustrate the huge gulf between the clubs.

Chelsea, second in the Premier League with Chesterfield in the same position in their division,

fielded a strong side and took only four minutes to open the scoring as Timo Werner bundled home from close range.

Before Romelu Lukaku added a third and Andreas Christensen‘s looping header made it 4-0 before the break.

But the big moment – and biggest cheers – came 10 minutes from time when Chesterfield substitute Akwasi Asante turned in a rebound after Marcus Bettinelli saved from Kabongo Tshimanga.

It was a moment of unforgettable, unconfined joy for Chesterfield and their fans – and fully merited for their tireless contribution to an entertaining FA Cup third round tie.