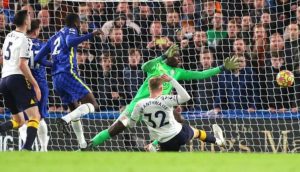 Chelsea missed a chance to move two points behind Premier League leaders Manchester City as a depleted Everton side earned a superb point at Stamford Bridge.

But Everton equalised four minutes later when 19-year-old defender Jarrad Branthwaite, in his first league appearance of the season, converted at the back post after Anthony Gordon’s free-kick.

Thiago Silva had a chance to win it for the hosts but saw his powerful header superbly saved by Pickford.

It was an impressive performance from the England international as he also kept out earlier efforts from Christian Pulisic, James, Jorginho and three strikes from Mount when it was goalless.

“Jordan Pickford made some good saves, it is important to have a good goalkeeper,” Everton boss Rafael Benitez said.

“Sometimes you need a bit of luck, this year we are not very lucky with all the injuries.

“Obviously, it is difficult to get points here but … we did it with so many senior players not available and players on the bench still with some issues.”

On Branthwaite’s goal, Benitez added: “He’s a good player, a young player who has the potential. We were practising set-pieces, so really pleased for him.”