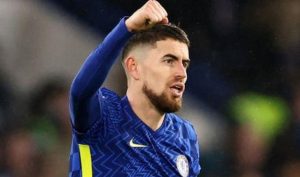 Teenager Joe Gelhardt, brought on as an 81st-minute substitute, appeared to have earned a late point for Leeds with his first touch – the 19-year-old sliding in to send Tyler Roberts‘ low cross past Edouard Mendy.

But Chelsea, knocked off top spot in the table following their 3-2 defeat by West Ham last weekend, fought back as Mason Mount met Alonso’s low cross with a first-time finish to restore parity before the interval.

Thomas Tuchel’s hosts were awarded a penalty of their own before the hour mark after referee Chris Kavanagh reviewed Raphinha’s sliding challenge on Antonio Rudiger, allowing Jorginho to complete the turnaround.

Despite Gelhardt’s heroics, it was Jorginho who had the final say with another confident penalty after Mateusz Klich brought down Rudiger to deliver a victory that ensures third-placed Chelsea remain two points behind leaders Manchester City.