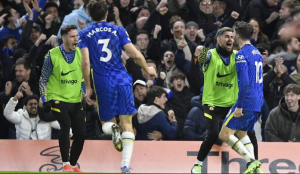 Chelsea and Liverpool have slipped further off the pace in the Premier League title race following a frantic 2-2 draw at Stamford Bridge.

Jurgen Klopp’s side arrived in west London one point and one place behind their hosts, who were looking to regain their momentum following a disappointing December which included a defeat to West Ham and draws against Everton, Wolves and Brighton.

Klopp wasn’t able to travel with the squad after testing positive for Covid-19,

Sadio Mane capitalising on a miscued defensive header from Trevoh Chalobah to put the visitors ahead early on.

With 26 minutes on the clock, Mohamed Salah latched onto a through-ball from Trent Alexander-Arnold, went round Marcos Alonso and slipped a shot past Edouard Mendy at the near post.

Chelsea hit back just before half-time, however, Mateo Kovacic curling one in off the inside of the post from distance after Caoimhin Kelleher, Liverpool’s stand-in goalkeeper, had punched clear a free kick.

They equalised a little over three minutes later, Antonio Rudiger flicking the ball to N’Golo Kante, Kante moving it on to Christian Pulisic and Pulisic bursting into the box before smashing a shot into the far corner.

Despite the second half being played at the same manic tempo, neither side could find a winner. Chelsea are now 10 points behind league leaders Manchester City, while Liverpool remain third.