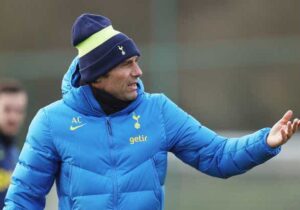 Former Chelsea Coach Antonio Conte has insisted he is happy at Tottenham despite admitting the club’s transfer policy will slow the rate at which he can make them competitive again.

In an interview with Sky Italia which was released last night, Conte suggested his squad was “weakened”

in the January window and that he was unhappy with the ambition show by the club in the transfer market.

The Italian is a serial winner and the implication has been that his expectations are not matched by Spurs chairman Daniel Levy.

But, in his interview with Sky Italia which was released in full today, Conte said he is not scared by the challenge facing him at Spurs.

He warned that their transfer philosophy will require patience but, asked if he is happy with “this Tottenham at the moment”,

“I am certainly happy with the way we are working.

“I think we are doing a lot but I am realising being inside the situation that it will take time and patience,

because there are many young players even at their first experience in the Premier League who need to grow, gain experience and raise their level.”

In a message that is likely to concern fans, Conte admitted the Tottenham job is “a totally different situation”

compared to his previous clubs, “in terms of perspectives, ambitions and in terms of fighting to win”.

“Tottenham has been in the middle of the table for so many years. But here this did not scare me”.

Conte was desperate for new signings last month but Tottenham missed out on Adama Traore and Luis Diaz,

and only brought in Juventus pair Dejan Kulusevski and Rodrigo Bentancur on deadline day.

While Dele Alli joined Everton on a free transfer and Bryan Gil moved out on loan to Valencia less than six months after his £25million arrival from Sevilla.

“What happened in January is not easy. Four players left.

So even numerically instead of reinforcing yourself in quotes you may have, on paper, weakened.

“Then precise choices were made for many reasons.

But I certainly never expected that in January four players who I still considered important would change their shirts for a thousand reasons. This shows the difficulty.

“It is inevitable that in January it is very difficult to get two players like Bentancur and Kulusevski to sign who, I repeat, are the ideal prospects for Tottenham.

Because Tottenham is looking for young players, players to be developed, not ready players.”