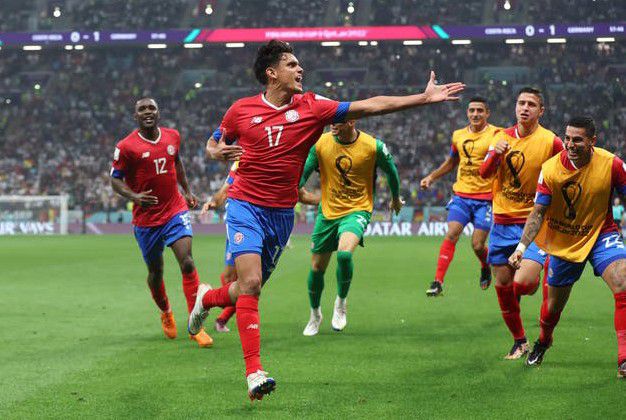 Germany have been eliminated from Qatar World Cup despite coming from behind to defeat stubborn Costa Rica 4-2.

It took Germany only 10 minutes to open the scoring, Serge Gnabry’s bullet header from David Raum’s cross leaving Keylor Navas with no chance.

Indeed, they should have been out of sight when Costa Rica’s Keysher Fuller got in behind following an Antonio Rudiger mistake but was denied by a brilliant save from Manuel Neuer,

who was making a goalkeeper’s record 19th appearance at the World Cup.

Like in their opening game against Japan, though, they were left stunned when Costa Rica grabbed an equaliser against the run of play.

Yeltsin Tejeda pounced on the rebound after Neuer could only parry Kendall Waston’s header.

There was still over half an hour to play, but it seemed Germany’s luck was out as Musiala (twice) and then Rudiger struck the post three times in seven minutes.

Germany were hit with a sucker punch when Juan Pablo Vargas gave Costa Rica a shock lead, but the game was turned on its head again thanks to a double from substitute Kai Havertz.

Niclas Fullkrug added a late fourth, but, alas, it wasn’t enough, and for the second consecutive World Cup finals Germany have been knocked out at the group stage.

Japan top the group with six points and Germany miss out on goal difference as Spain take the runners-up place.