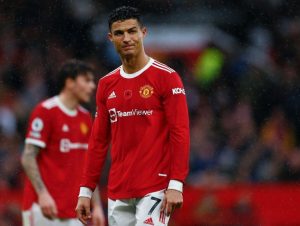 Gabby Agbonlahor believes Cristiano Ronaldo will be ‘so frustrated’ as he labelled Manchester United ‘embarrassing’ for their derby defeat to rivals Man City.

An Eric Bailly own goal and a timid strike from Bernardo Silva were enough to consign Ole Gunnar Solskjaer’s side to yet another defeat at Old Trafford, just a fortnight after being thumped by Liverpool.

Solskjaer had called the loss to Liverpool the darkest day of his near three-year reign.

And the manner of this loss to their neighbours will lead to renewed pressure during the international break.

Only three points separated these sides before kick-off but the gulf in quality and application soon became clear as Joao Cancelo was given time to swing in a cross that Bailly turned into his own goal inside seven minutes.

A string of superb David De Gea saves prevented things getting as ugly as they had against Liverpool.

But dominant City deservedly added another before the break as Silva got behind Luke Shaw to turn in a ball from Cancelo.

United were poor in defence and lacked control in possession as Solskjaer’s meek side failed to muster a response, leading to a smattering of boos at the final whistle.

Ronaldo looked isolated and dejected at times up front, earning a booking late on for a petulant challenge on Kevin De Bruyne for his troubles.

Agbonlahor insists the 36-year-old looks frustrated and dismissed claims he is ‘saving’ Solskjaer’s job, instead claiming the former Real Madrid man would rather be playing for City.

“I don’t think he is saving his job though, because there are talks that Conte didn’t even get asked for the job.

“There’s no one else that’s even been talked about, so I don’t think Ronaldo has saved his job.

“I just think Ronaldo is doing what he has been brought to do; score goals.

“You could see his frustration today. There was one clip where he booted the ball away.

He keeps making fouls and getting yellow cards, it’s not like Ronaldo – he’s frustrated.

“He wants to be in that City team with De Bruyne putting in crosses in, he’s getting [Aaron] Wan-Bissaka, who keeps hitting the first man with every single cross.

“He must be so frustrated in that team.”

With Antonio Conte moving to Tottenham Hotspur in the week.

Questions about United’s direction are once again being asked under Solskjaer and the Glazer family.

With the chasm between the Premier League elite growing between this United team.

Agbonlahor claimed the pendulum of power has swung firmly towards the Etihad and would remain that way for the foreseeable.

“That game was embarrassing for Manchester United.” “For me, you can no longer call that game a derby.

“A derby is where it is tight, teams are putting in tackles, not one Manchester United player made a tackle.

“Honestly, it was embarrassing from every single Manchester United player.

You just look at it and you think, ‘were Man City playing a keep ball session?’

“We used to play keep ball sessions for Villa where, if you made ten passes, you scored a goal.

That’s what it was like second half, Manchester City not even trying to get another goal.

“It was embarrassing for Manchester United and, honestly, Manchester will be blue for a long time.”