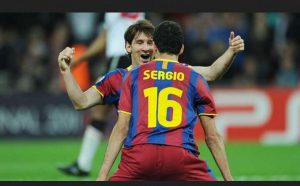 The Spanish midfielder Sergio Busquets accepts  that Lionel Messi’s departure from Barcelona came as a “shock”.

Sergio saw the six-time Ballon d’Or winner walk away from Camp Nou as a free agent over the summer.

Paris Saint-Germain embracing the opportunity to acquire the all-time great.

Barca’s loss has been their gain, but Busquets is eager to see everyone in,

Catalunya move on and find other ways of claiming major silverware.

Without the South American superstar leading the charge.

“It was a shock, for everything that Leo gave to Barca and personally to me.

“It was an accumulation of emotions that were difficult to digest.

But, we have to try to change the story.

We are at the beginning of the season and we’ll have to get used to playing without Leo.”

“Anything can happen in football.

Chelsea won the Champions League last season and were not favourites.

“The important thing is the collective level and we know that we do not have Leo or his individual qualities.

We are here, excited and aware of the difficulty, but we have a lot of ambition and we want to win.”