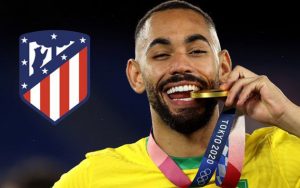 The  Brazilian foward,  has committed his future to the Liga champions through to 2026.

Atletico Madrid have completed the signing of Matheus Cunha from Hertha Berlin for a reported €26 million (£22m/$31m) fee.

The Liga champions have quickly managed to reach a final agreement with Hertha for Cunha,

which reportedly includes a 10 per cent sell-on clause for the German club,

with the Brazilian committing to a five-year contract at the Wanda Metropolitano.

READ Also: Struggles Wilshere: How Do I Tell My Kids That No Club Wants Me?

Atletico have confirmed Cunha’s arrival in a statement on their official website, which reads:

“Atlético de Madrid and Hertha BSC have reached an agreement over the transfer of Matheus Cunha. The Brazilian (May 27, 1999) has signed a five-year contract.

What to be expecting from Cunha?

Cunha is a versatile player capable of operating as a centre forward,

a winger or a traditional No.10 – with an explosive turn of pace and an eye for goal.

The 22-year-old built on a strong 2020-21 campaign at Hertha by helping Brazil’s Under-23s win gold at the Tokyo Olympics earlier this summer,

scoring three goals, and is expected to step onto the senior stage at international level in the near future.

Cunha will add greater depth to Simeone’s attacking ranks as Atletico fight for silverware on both domestic and European fronts once again,

and will compete for a regular spot in his starting XI alongside the likes of Luis Suarez and Angel Correa.

Cunha has left Hertha after just a season-and-a-half on their books,

having initially been snapped up from RB Leipzig in January 2020.

The talented striker appeared in 40 games across all competitions for the Bundesliga outfit in total, recording 13 goals and 10 assists.