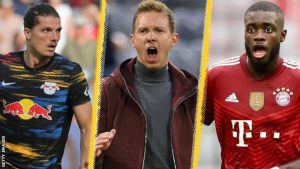 themselves as a force after their promotion to the top flight in 2016.

“As a child my Bayern jersey was my pride and joy – I got a new one at Christmas every year,”

He  was also linked with Tottenham and Arsenal.

“I’ll give everything for this club.”

He added: “I want to win as many matches as possible and of course collect lots of titles.”

Read Also: Between 2011-2021 More Than £38bn Has Been Spent On Players Worldwide, Fifa Reports

and France defender Dayot Upamecano from the Red Bull Arena to the nine-in-a-row,

Bundesliga champions, where he will wear the number 18 shirt.

Last season, the trio helped Leipzig finish second behind Bayern in the league,

and reach the German Cup final, which they lost 4-1 to Borussia Dortmund.

Bayern have made an impressive start to life under 34-year-old head coach Nagelsmann,

opening their title defence with seven points from three games in addition to beating,

Dortmund to retain the German Super Cup and thumping fifth-tier side Bremer SV 12-0 in the German Cup first round for their biggest win since 1997.

As well as Sabitzer and Upamecano, Bayern have this summer signed English left-back Omar Richards,

and former Germany Under-21 goalkeeper Sven Ulreich – who was previously at the,

Bavarians between 2015 and 2020 – after they left Reading and Hamburg respectively.