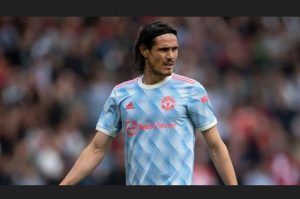 The Uruguay striker Cavani picked up the knock in training in the build-up to Saturday’s 4-1 win over Newcastle.

Ole Gunnar Solskjaer says Cavani will be sidelined for a “week or so”.

Nineteen-year-old Anthony Elanga is included in the 22-man squad,

Portugal forward Ronaldo, has been named in the squad for his first Champions League trip with the Reds since featuring in the 2009 final.