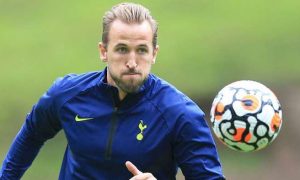 Harry Kane has confirmed that he’ll be staying at Tottenham for the duration of the 2021-22 season to put an end to the rumours linking him with Manchester City.

The England International had been tipped to make a big-money switch to Etihad Stadium before the transfer window closes, but has now decided to remain at Spurs.

Speculation over Kane’s future has been raging in recent months,

with Manchester City having been touted as the most likely next destination for a man,

who has been open about his ambitions to win the biggest trophies in the game.

The 28-year-old has yet to win a single piece of silverware at Spurs,

but, he still has three years left to run on his contract, and has now announced that,

he will remain in his current surroundings beyond the end of the summer transfer window.

Kane has confirmed his decision in a message to his followers on Twitter, which reads:

“It was incredible to see the reception from the Spurs fans on Sunday and to read some of the messages of support I’ve had in the last few weeks.

“I will be staying at Tottenham this summer and will be 100% focused on helping the team achieve success. #COYS”

Also Read: Struggles Wilshere: How Do I Tell My Kids That No Club Wants Me?

It has been reported that the Manchester outfit also submitted an improved offer,

with Guardiola now likely to make do with the attacking options he already has at his disposal.

Kane returned to action for Tottenham during their 1-0 win at Wolves last weekend,

stepping off the bench for a 20-minute cameo after being left out of Nuno Espirito Santo’s squad for the club’s opening game of the season against City.

The England international will now be in line to make his first Premier League start under the Portuguese boss this Sunday,

with a home fixture against newly-promoted Watford on the cards.