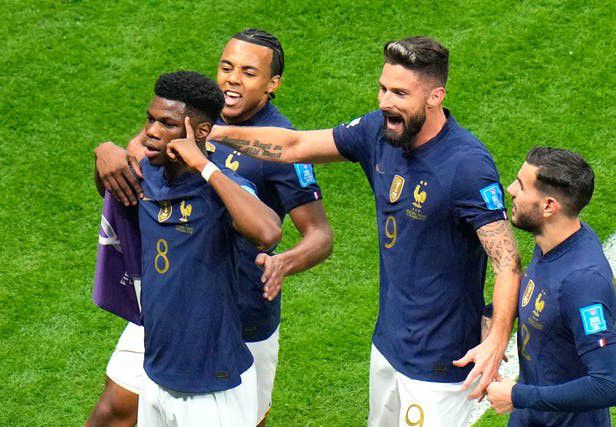 Gareth Southgate’s side produced arguably their best performances against an elite team at a tournament since Euro 96, but it ultimately proved fruitless as their familiar failings from the penalty spot came back to haunt them again.

France mustered the fist effort on goal when slick interplay between Antoine Griezman and Ousmane Dembele presented the latter with a crossing opportunity after Luke Shaw’s over eagerness in the tackle was exposed.

The England goalkeeper was left helpless soon after, however, when, in the 17th minute, Aurelien Tchouameni was afforded too much space to line-up a thunderbolt of a shot from 25 yards which rifled low into Pickford’s bottom left-hand corner.

The Three Lions skipper thought he would get the chance to equalise from the penalty spot when he outfoxed Dayot Upamecano and wriggled his way into the box only to be upended by the France defender.

VAR paused to review the footage but deemed that referee Wilton Sampaio had made the correct decision in judging that Upamecano had not committed a foul.

Sampaoi had little option but to point to the spot 10 minutes after the re-start, however, when Saka was upended by Tchouameni and Kane kept his nerve to beat Lloris from 12 yards and draw level with Wayne Rooney as England’s joint all-time leading scorer.

England carried the greater thereafter but it was France who edged back in front with 13 minutes remaining through Olivier Giroud.

The veteran striker had only just seen a point-blank effort on the volley saved by Jordan Pickford but he was not to be denied from the next attack when he beat Harry Magurie to Antoine Griezmann’s cross and powered his header beyond Pickford.

England dusted themselves down and earned an instant opportunity to equalise when Theo Hernandez needlessly barged substitute Mason Mount over in the box.

It took the intervention of VAR to convince the increasingly unpredictable Sampaio to point to the spot but Kane was unable to maintain his composure and blasted his effort over the crossbar.