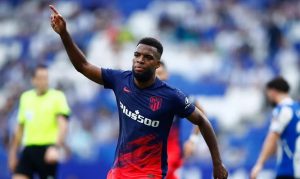 The French International Thomas Lemar secured victory for Atletico over Espanyol who led for much of the contest.

And, they looked like holding on for the upset of the la Liga season so far until ten minutes from time.

Half-time substitute Thomas Lemar was denied an equaliser in the 54th minute when,

he turned Marcos Llorente’s cross home at the far post but Luis Suarez,

who narrowly missed touching the ball at the near post, was ruled offside and interfering with play.

Read Also: Sampdoria Came From Behind To Claim A Point Against Italian Champions Inter Milan

Just when it appeared the capital club were running out of ideas.

The belligerent Yannick Carrasco dribbled into the area then, after losing the ball,

won it back and drilled home from a narrow angle.

A draw seemed a fair result but Lemar’s one-two with Carrasco enabled the French international to get inside the box.

And, he produces a shot which Diego Lopez could only push against the ball upright from where it agonisingly fell into the net.