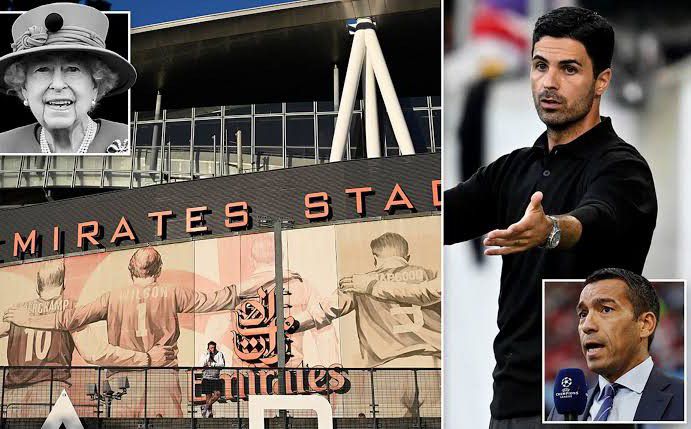 Arsenal’s Europa League clash with PSV Eindhoven on Thursday is in doubt over a possible shortage of police offers.

Following the death of The Queen, UK police forces have been deployed across the country to oversee the transportation of her body, with security presence in London expected to be at unprecedented levels.

Tottenham, Brentford and Chelsea are all at home over the coming weekend – while The Telegraph note that Arsenal’s midweek game is also in doubt.

UEFA is understood to be confident that all other European games involving British sides will go ahead this week, but there is significant uncertainty over whether sufficient police forces can be found for Arsenal’s game.

Rangers’ Champions League meeting with Napoli, initially scheduled for Tuesday, has been pushed back to Wednesday.

The Queen’s coffin will leave Scotland on Tuesday morning and is expected to arrive in London later that day.

Talks will be held between Government, football and police officials to try and ensure all fixtures are fulfilled safely, with the controversial decision made to ban away fans from the Rangers vs Napoli game to reduce the strain on police.