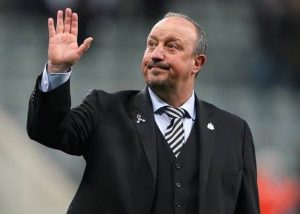 Rafa Benitez was appointed as Carlo Ancelotti’s successor and was immediately met with a hostile reception by Toffees supporters due to his old links with Liverpool.

Despite a bright start to the season which saw them win three of their opening four Premier League games.

Everton have since slumped in dramatic fashion and currently 15th in the table.

Reports flew around regarding Benitez’s sacking on Saturday night and the club have now confirmed the two parties have gone their separate ways.

The club statement on the sacking read:

“Benitez, who joined Everton in June 2021, has left the Club with immediate effect.

“An update on a permanent replacement will be made in due course.”

The announcement will not come as a surprise to Everton fans, with the Toffees enduring a dismal run of form in recent months.

Everton’s defeat to Norwich on Saturday was the club’s ninth in their last 13 league games – a run which has seen the club drop way down to 16th in the table.

Currently, the club sit just six points above the relegation zone, with an abysmal goal difference of -10 after 19 Premier League games.