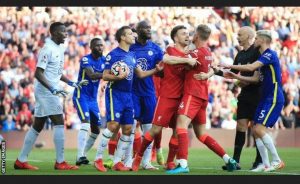 Chelsea players protest to the referee decision over how  Reece James handled the ball on the line.

Chelsea have been charged by the Football Association with failing to control their players in their 1-1 Premier League draw at Liverpool.

The charge relates to the way the Blues players reacted after Reece James was,

shown a red card late in the first half of the Premier League match at Anfield.

Read Also: Enderson Pen Down To Extends His Contract At Manchester City

“Chelsea FC has been charged with two breaches of FA Rule E20.1 following their,

“It is alleged that Chelsea FC failed to ensure its players conducted themselves in,

an orderly fashion during the 48th minute of the first half and following the half-time whistle.

The charge relates to two incidents before the break when Reece James was sent off and Liverpool were awarded a penalty.

Chelsea boss Thomas Tuchel later said he was unhappy with the officiating.

Referee Anthony Taylor gave the penalty and dismissed James after a brief look at the video assistant referee pitchside monitor.