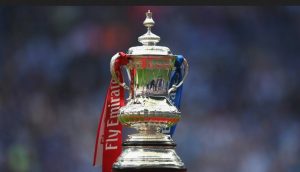 The draw for the fourth round of the 2021/22 FA Cup has been made with West Ham set to travel to sixth-tier Kidderminster Harriers.

The National League North promotion chasers secured their place in the draw courtesy of a famous victory over Championship Reading,

and they will be hoping for another upset against higher-league opposition next month.

The other non-league side left in the competition, Boreham Wood, have been rewarded for defeating AFC Wimbledon with a trip to Championship high-fliers AFC Bournemouth, who beat Yeovil Town to reach this stage.

In another standout tie Plymouth Argyle have been handed a trip to Stamford Bridge to face Chelsea, after beating Birmingham City in round three.

Meanwhile, Liverpool will host Cardiff City and Manchester City will be entertaining second-tier opposition too in the form of Fulham.

Manchester United or Aston Villa will take on a resurgent Middlesbrough, and Nottingham Forest or Arsenal have been drawn against holders Leicester City.

The ties will be played over the weekend of 5-6 February with the television selections likely to be confirmed in the coming days.

The full draw for the fourth round is below…