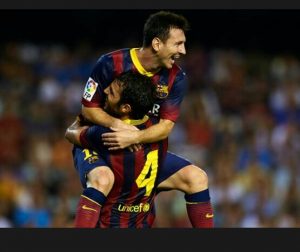 The pair came through the youth ranks together at Camp Nou and struck a firm friendship on and off the field.

Cesc Fabregas shared the touching – and rather embarrassing – story of his first encounter with Lionel Messi as he paid tribute to the soon-to-be ex-Barcelona idol.

The Catalans announced this week that Messi, 34, would not be continuing at Camp Nou due to La Liga salary restrictions which make renewing his contract impossible.

And Fabregas, who came up with the Argentine at La Masia, took the opportunity to say farewell to his former team-mate, who has written himself into club history over the past decade.

‘You left me on the floor’

“I will always remember the day you came to the dressing room at 13 years old and we were told an Argentine kid had come to try out,” Cesc wrote in a series of messages published on his Twitter account.

“You sat down and never said a word. The coach told me to go in strong in a one-on-one exercise against you, you looked so small that I thought I’d take the ball off you in a second.”

The ex-Barca, Arsenal, Chelsea and Spain star, however, was quickly proved wrong, becoming one of the first in a long line of markers in Europe to suffer Messi’s outrageous abilities on the ball.

“Silly me, you left me on the floor and from there I knew you were something special,” he continued.

“My dream had always been to play in the Barca first team, but to do that with you and with Geri [Gerard Pique], that always made that dream a lot more special.

“In the end it came true and just for the fact that I felt like I did playing at false 9 alongside you and seeing the connection we had, that made it all worth it. You leave as the best player of all time. Barca will never be the same without you.

“Thank you for everything you have given and everything that you are, because behind that competitive animal there is a spectacular, humble, kind and generous person.

“I wish you, Anto, Thiagui, Matu and Ciro all the best. I am sure you will be happy wherever you go. I love you.”

While Messi’s 21 years in Catalunya may be coming to an end, his brilliant form last season with Barca and heroics in delivering Argentina the Copa America in July confirm that he remains amongst the world’s very best even at 34.

Few teams could thus hope to match the star’s wage demands even without a transfer fee changing hands, and French giants Paris Saint-Germain are believed to be on the verge of closing a deal.

Messi will hold a press conference on Sunday where, it is expected, the forward will reveal further deals both concerning his split with Barca and his future in the game.