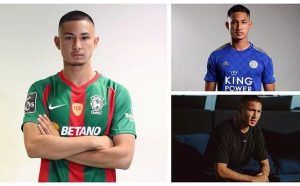 Money isn’t everything, as Faiq Bolkiah’s experience in football has proven. The American joined Maritimo a year and a half ago and has now rescinded his contract without ever making his debut in Portugal.

Faiq joined in the summer of 2020 after leaving Leicester City, having previously belonged to the Chelsea youth academy, though he never played for either club.

He hasn’t played in Portugal either, though he did make the bench for a game against Sporting CP in February 2021.

Son of the prince of Brunei, Jefri Bolkiah, and nephew of the Sultan, Hassanal Bolkiah, he has a fortune worth 15 billion euros.

This season he was sent to play with Maritimo’s B team, but he failed to make an impression there either and his contract until next summer was rescinded.

Born in Los Angeles but nationalised in Brunei will continue to pursue his journey as a football.

He once said about his style of play:

“I’m a quick player, I like to make things happen. I’m a winger and a No.10, I like direct play and scoring goals.”

Having begun his career with AFC Newbury in England, he played for Southampton, Arsenal, Chelsea and Stoke City before joining Leicester in 2016.

Fair may not have hit the headlines on the pitch, despite having five appearances for Brunei to his name.

But he has off it, having spent 35 million euros in a month and having a pet tiger, which he once shared a video of as he nutmegged the animal.