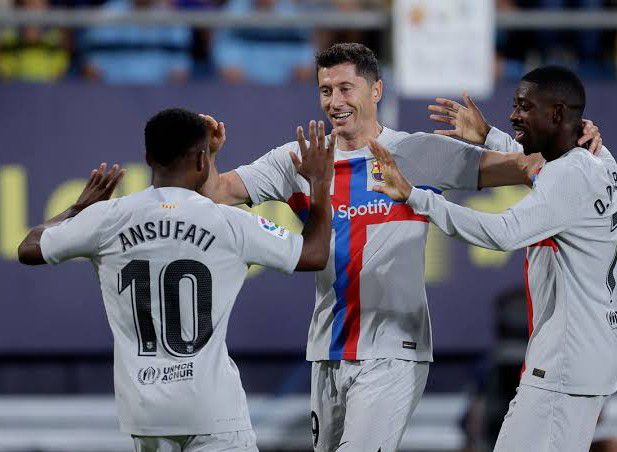 All eyes will be on Robert Lewandowski as he looks certain to start against former club Bayern Munich in the Champions League later today.

The Polish striker has been in sensational form for Barcelona sice arriving in the summer,

scoring a hat-trick last week in his first European match for the club as Xavi’s side cruised to a 5-1 win over Viktoria Plzen.

While there is pretty much no doubt who will be leading the line, there is a decision for Xavi to make in wide areas.

Ousmane Dembele has been similarly impressive and is expected to start, with Raphinha and Ansu Fati competing for the other spot.

Marcos Alonso and Hector Bellerin have both travelled to Munich, after making their debuts over the weekend against Cadiz.

That lineup was a largely rotated one, with Pedri among those he will surely come straight back into the side.

Bellerin has a chance of starting again but Jules Kounde looks a more likely option at right-back, while Alejandro Balde is probably leading the race to start on the left, leaving Alonso and Jordi Alba having to settle for places on the bench.

There are plenty of options in the centre of defence for Xavi too.

Ronald Araujo and Eric Garcia appear to be the favoured pairing, though that could change in the future should Kounde move inside.

It seems probable that the Frenchman remains at right-back for now though, offering a more defensive option to combat the huge threat of Bayern out wide.