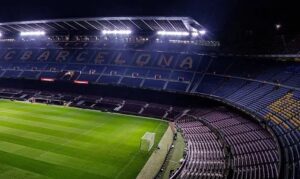 Amid the new €280,000,000 new sponsorship deal between FC Barcelona and Spotify, there were fears of the stadium’s name changing drastically.

Ever since it opened its doors to replace Camp de Les Corts, Camp Nou had never suffered a name change.

We are talking about the largest stadium in European football still today.

A place with so much rich history that today added a new word to its name.

With Spotify’s new deal, the club will finally get the income they need in order to attempt the transfers they want next summer.

Plus, they will get to compete in all tournaments as they have done ot over the last two decades.

But who broke the story of the new official name first?

According to RAC1, FC Barcelona’s new official name will be Spotify Camp Nou as soon as the deal between both parties becomes official.

Rumors suggest most of this money will be invested in the possible signing of Erling Haaland, Borussia Dortmund’s IT-player that every club in Europe wants.

If the deal is finalized, the agreement is that both the men and women’s football teams will sport the streaming service’s logo in the front.

Plus, the deal was to get the stadium’s naming right. A decision that didn’t sit well with a lot of people in Barcelona.

According to reports, Barcelona’s CEO didn’t agree with this new deal and decided to step down from his position effective immediately.

Ferran Reverter considered offering publicity in the front of the jerseys and the stadium naming rights was too high of a price to pay for FC Barcelona.

A place with so much history to tell is being sold to the highest bidder and nobody is batting an eye,

that’s how Reverter thinks and that’s how a lot of Barcelona die hard supporters also think.

However, president Joan Laporta’s actions are directly in line with what he beleives the club needs right now in order to survive the current climate. Changing the stadium’s name should be the least of the club’s worries.