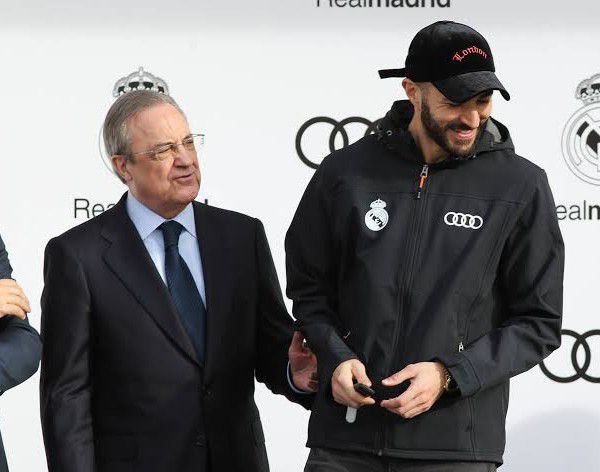 The president appeared with a broad smile,

satisfied with a new title, and sent a message to sailors after the extraordinary season of Benzema.

Read Also: Thibaut Courtois: Some People Celebrated A Clasico Win As Though They Had Won A Title

“No one can doubt that they’ll give him the Ballon d’Or.

They can’t take it away from him”. These are his impressions.

Alcaraz and Nadal at the Bernabéu:

“Two tennis greats and two madridistas. Alcaraz was the first time he went to a soccer field.”

Feeling: “The same as all the madridistas. A great satisfaction.

The planning we did was to win LaLiga and win the Champions League.

The first one is already won, let’s see if we can win the Champions League”.

Planning: “The decisions are rational. They don’t go right and wrong.

If it hadn’t gone right this year, it could have gone right next year. Now all celebrate.”

“Benzema has been good now, and since he came.

No one can doubt that they will give him the Ballon d’Or. They can’t take it away from him.”

Ancelotti has said that he did not expect the call from Madrid when he was signed:

“Possibly. As soon as we called him he said, ‘I’m running’.

He says it, not I say. He has done very well. As a whole, the identification with Real Madrid is great”.

“They will retire soon because they are tired. This helps, this communion between fans and players.”

Cybele: “I’ve never been. It’s a place for the fans and the players”

The fans expected three good news. The League the first, the Champions the second and Mbappé the third:

“I hadn’t thought of that. It could be true. Today let’s talk about the first one.

We’ll see about the second and third on Wednesday, when we prepare for the season.”

“Happy day for all madridistas. It’s a well-deserved, hard-fought league, with a great coach like Ancelotti, who knows the club and what it stands for.

We’re all very satisfied. This gives us life for Wednesday”.

Team Commitment: “As Ancelotti has told me many times, the difference he finds with other big teams is that the Madrid players are very Madrid fans, they are like fans.

When things go well, everything has gone well”.

Ancelotti has won the title in the five major leagues:

“He is the one who best manages powerful squads like the ones he has always trained.

That experience is noticeable. We have been right with everything,

“Life is as it is and no one will doubt that the next Ballon d’Or should be Benzema.

And belatedly, he should have won it earlier”.