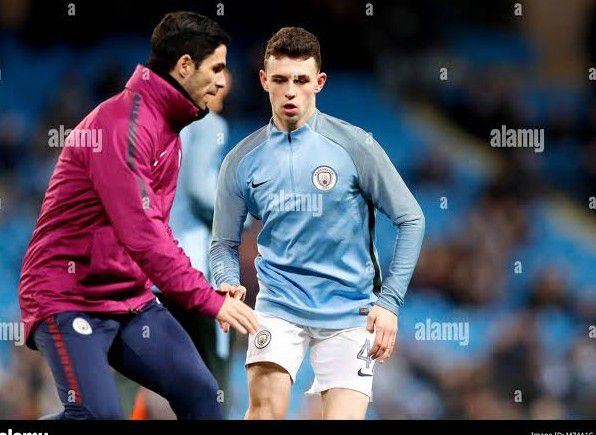 Manchester City star Phil Foden has described Arsenal manager Mikel Arteta as an ‘unbelievable’ coach, having worked closely with the Spaniard at the Etihad Stadium.

Prior to being appointed Arsenal boss in December 2019, his first senior managerial gig,

Arteta had been an assistant coach to Pep Guardiola at City for three and a half years.

During that time, he saw Foden’s development first hand and had a part to play.

“I remember working with him closely after training on some things I needed to improve.

I know how good he can be as a coach. He’s definitely a great coach.”

“Playing with [Arteta], he was a guy who was very focused, very intelligent with the way he trained.

As a coach he is very similar. He is very intense, very hands on with the players and trying different things, new techniques to try to help them.

I like it. He’s a modern coach,” Wilshere explained.

Arteta’s management has been put under the spotlight this season following the release of Arsenal: All or Nothing, offering a behind the scenes look at the club during the 2021/22 campaign.

In tandem with technical director Edu, the Spaniard has been tasked with rebuilding the squad over the last three years and is now starting to see the fruits of his labour.

while three defeats on the bounce at the beginning of last season was the club’s worst start in 67 years.

But the improvement over the course of the campaign was clear to see and, in the end,

Arsenal were only a surprise late collapse away from getting back into the Champions League.