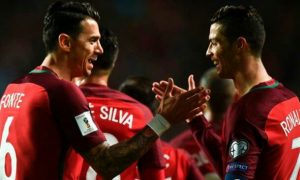 Jose Fonte says he writes daily to international team-mate Cristiano Ronaldo asking him to come to Lille – and the defender said he gets the same dismissive feedback with each attempt.

Ronaldo laughs off the ambitious attempt every time, says Fonte, shutting down the requests to leave Juventus.

Fonte has not given up however, and jokingly said he would love to see his friend beat Lionel Messi and Paris Saint-Germain to the Ligue 1 title. Messi joined Lille’s rival this week from Barcelona.

“It will be even more difficult for us [now that Messi is in France], but we are up to the challenge,” Fonte said to sportdaylight.”Every day I write to Cristiano Ronaldo to come to Lille. He just answers: ‘ha ha ha’.

“We’ll try to use our weapons and I’ll try to bring Cristiano back in some way. I’ll make a plan! All he has to do is [win] the French title.”

“What a challenge to have, what a thing to [possibly] say to your children: ‘We played against Messi, Neymar and Mbappe, and we managed to win and not concede goals,'” Fonte said. “It will be interesting to see how competitive the league is this season.”