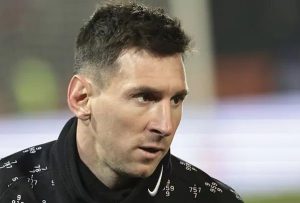 The Argentine forward Lionel Messi swap Barcelona for Paris Saint-Germain in the summer, his impact in the French capital is not what was expected of the seven-time Ballon d’Or winner.

The prospect of forming a super strike-force with Neymar and Kylian Mbappe hasn’t yet come to fruition, and Messi himself is in the midst of his worst season, stats wise, of his career.

As yet, the 34-year-old has bagged a goal every 865 minutes in Ligue 1 – his only goal in the French top flight.

And even when looking at his first campaign with Barcelona, there is a clear drop in output.

During the 2004/05 season, Messi got one goal over the 75 minutes he played, and then the following year he averaged one goal every 155 minutes in LaLiga Santander.

Despite his somewhat poor domestic form this season, Messi has been PSG’s inspiration in the Champions League, with five goals in the group stage which helped the Parisian’s qualify for the knockout round.

Lionel Messi though, especially at this stage in his career, shouldn’t be judged on his goals alone.

In fact, he almost always manages to influence the game somewhat, and in Ligue 1 he has had a hand in five goals, including a hat-trick of assists against Saint-Etienne.

Of course, this is all under the caveat that Messi is adapting to a new life in a new city, which itself brings multiple issues.

Coupled with the stop start nature of the initial part of a campaign – thanks to the international breaks – Messi hasn’t yet been able to get into a rhythm.

That said, Messi is confident that in 2022, once he is completely adapted to life in Paris and with PSG, he can inspire his teammates to domestic and European glory as they look to win their maiden Champions League.