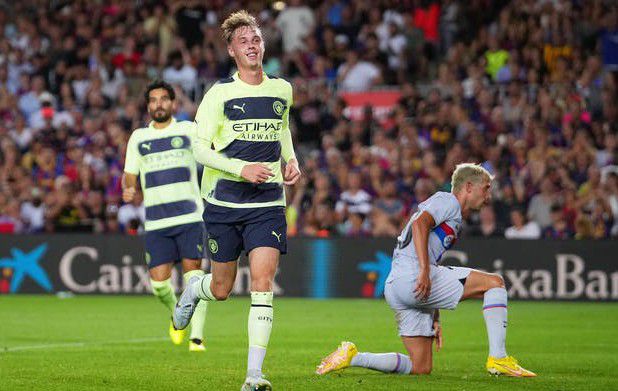 Riyad Mahrez scored from the spot deep into stoppage-time as Manchester City equalised to earn a 3-3 draw against Barcelona at the Nou Camp in a charity match.

The game took place to raise funds for ALS research, in honour of former Barcelona goalkeeper and coach Juan Carlos Unzue who was diagnosed with ALS two years ago.

and Xavi in the dugouts during the match, watching what was an entertaining affair as expected.

Julian Alvarez put the visitors in front after capitalising on a goalkeeping error, before Pierre-Emerick Aubameyang put any uncertainty over his future to one side as he volleyed Barcelona level.

Frenkie de Jong did the same as he finished well after the break, and while Cole Palmer swiftly equalised, Memphis Depay, yet another Barcelona player who could leave the club in the coming days, came off the bench to restore the lead.

A nasty head injury suffered by Luke Mbete resulted in a length period of stoppage-time,

which City took advantage of as Erling Haaland won a penalty and Mahrez hammered it into the top corner as it finished in a fitting draw.