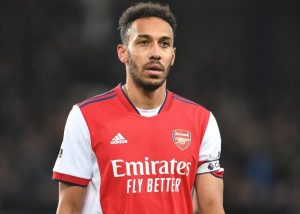 The Gaborn Striker Aubameyang played no part of the Emirates Stadium clash, which the Gunners won 3-0 – Mikel Arteta citing a ‘disciplinary breach’ as the reason for the captain being left out.

It’s not clear what the disciplinary breach that led to Aubameyang being dropped was, however, 24 hours before the match tattoo artist Alejandro Nicolas shared an image on Instagram of him tattooing Aubameyang’s arm, the Sun reports. 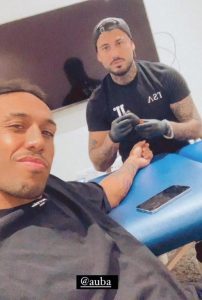 This isn’t the first time the Arsenal forward has been left out of a matchday squad due to ill-discipline, Aubameyang missing their league win at home to rivals Tottenham last season after reporting late on the day.

The incident has led to questions about the 32-year-old’s future and Gabby Agbonlahor suggested Aubameyang should consider giving up the captaincy at Arsenal.

“I think Arteta’s handling him right.”

“Arteta played at a great level, he played not that long ago, so he’s not going to accept any player thinking they can do what they like and have their own rules.

“When I played at Aston Villa I gave up the captaincy.

I was club captain and I went on holiday during an international break and got caught smoking shisha.

“As footballers we’re meant to be robots who aren’t allowed to do anything.

I got a lot of heat for that so I gave up the armband.

“Maybe that’s something Aubameyang needs to do.

“I wasn’t professional enough for it. You can be a great captain on the pitch but if you’re not doing the right things off it then you can’t really be a captain off it.

It was probably going to be taken off me anyway but I felt I wasn’t being professional enough off it.

“Because the club were so disappointed it felt like the right thing to do.

In my later years I wasn’t professional on and off the field, I’ll hold my hands up for that.

“I don’t think he will give it up. He might think in his mind that he hasn’t done anything wrong.

“I’ve been there when you’ve sulked, when you’re not playing loads of times.

“Maybe Aubameyang will look at himself and go ‘you know what, I don’t deserve to be captain of Arsenal.’