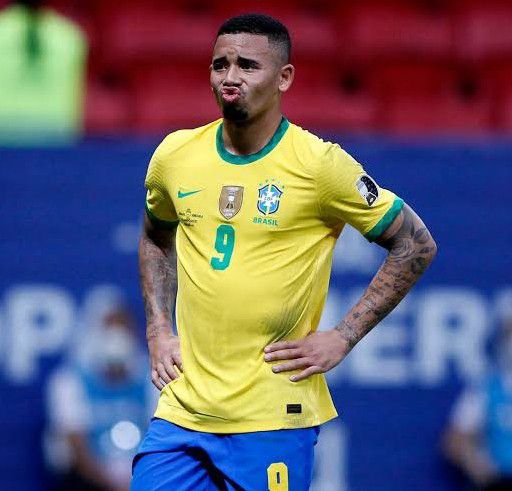 Gabriel Jesus made his first start for Brazil match yesterday along side his team mate Gabriel Martinelli in a match that ended in shocked defeat to Cameroon.

Arsenal front man was replaced by Pedro at 64min of the match  before, Vincent Aboubakar header the winner in stoppage time

Gabriel Jesus will not be feature for Brazil’s World Cup campaign after he suffered a knee injury during game.

After the match Jesus complained of feeling pain in his right knee, an area that has caused him considerable trouble in the past.

Jesus underwent medical examinations this morning after which it has been determined,

according to Globo Esporte, he will not feature again in the tournament.

for Mikel Arteta his headline summer signing’s absence is unlikely to be long-term.

Arsenal are back in Premier League action on Boxing Day against West Ham and although that fixture is likely to come too soon for Jesus,

he is reported to be targeting a return in early January.

Brazil are also set to be without Manchester United’s Alex Telles, currently on loan at Sevilla, for the knockout stages after he too suffered a knee injury against Cameroon.

Telles’ setback is said to be more serious that Jesus – he left the field of play in tears last night – and is likely to be forced to undergo surgery.

Brazil, meanwhile, continue to sweat on the fitness of Neymar who hasn’t featured since he suffered an ankle injury in their first game of the tournament against Serbia.

Following the game against Cameroon, team doctor Rodrigo Lasmar provided an update on the condition of Neymar and left-back Alex Sandro.

‘Regarding Neymar and Alex Sandro, we think we have time on our hands and there is a possibility.’

‘Let’s wait what their transition will be – they have still not started to train with the ball and it’s something they will do tomorrow.

‘It will be important to see how they respond to this new style, so depending on that, we will make a call.’

Head coach Tite had been hopeful that his star man would return in time for the last 16 but the chances of the PSG star featuring against South Korea appear to be fading.