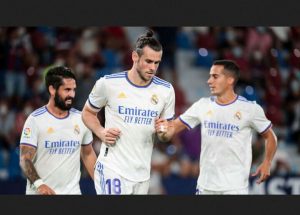 Gareth Bale has entered the final year of his deal at Santiago Bernabeu but,

He is reluctant to be drawn on what the future holds for him at Real Madrid,

after entering the final year of his contract, but the Welshman says retirement was never on the cards this summer.

The 32-year-old had hinted ahead of Euro 2020 that his career, both with his country,

and at international level, could be coming to a close after a couple of testing years.

He did, however, enjoy a positive end to a loan spell back at Tottenham and has been,

offered a clean slate at Santiago Bernabeu following the return of Carlo Ancelotti as successor to Zinedine Zidane.

Bale was asked if a contract extension could now be lined up:

up: “I’ve only just started this year and you’re already asking questions!

“I haven’t thought about anything beyond this game [Wales’ World Cup qualifier against Belarus on Sunday] to be honest.

I’m just thinking about each and every game as it comes. Just trying to enjoy it.

“I want to play in a World Cup for Wales, not just for myself, but for the country as a whole.

I think it would be an incredible experience for the nation.

We’re fully focused now on trying to do that with another crucial game.

“In terms of the caps, I think every player would love to get to 100 caps.

I’m very close, and it would be nice if I can get it done.”

“Everyone just seems to make up stories when they want. I don’t know.

They just make up some wild things. I never planned to finish.

“Like I said before, I just wanted to concentrate on the Euros,

and didn’t want to have to explain myself. I didn’t feel like I needed to.

“I still don’t feel like I need to, and I think no matter what I said I was going to do,

whether it was to stay, leave, retire, whatever, it would have caused a big story.

An annoying story, and a distracting story.

“So I think for me it was better not to say anything and just try to concentrate on the job in hand.”