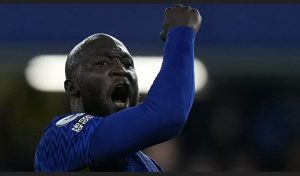 Chelsea were able to play extremely well in a 2-2 draw with Liverpool on Sunday, even with Romelu Lukaku dropped from the squad.

Yet, in the wake of his explosive interview over his passion for Inter, Gary Neville has made clear the best the Belgian can do is ask for forgiveness in the dressing room.

Thomas Tuchel felt that Lukaku had been unhelpful to the squad’s preparation for the Liverpool fixture.

With the timing of his pre-recorded interview, and there was no other option but to leave him out.

“I think the best he can do is ask for forgiveness in the dressing room from his teammates.”

“I think today Lukaku would have been watching that game suffering a little bit, knowing he wanted to be out there.

“A manager has to have control in a football club.

If a manager doesn’t have control and a player can do what he wants and still get picked, what sort of message does that send?”

It’s a little unclear exactly what happens next with regards to the former Manchester United forward’s future at Stamford Bridge,

with it almost certain that no club would look to repay the 115 million euros the Blues parted with to sign him in the summer.

Furthermore, there is a growing concern that a pattern has emerged from Lukaku’s career of not staying at clubs too long, which Neville pointed towards.

“Romelu Lukaku was at my club, I said this before the game”…

“I didn’t shed a tear when he left my club.”

“He didn’t say that he wanted to leave openly, but you could just tell he didn’t want to be there, he wasn’t committed.

I didn’t think he was the most professional.

“I knew he wasn’t right for the club, I didn’t think he was a Manchester United player.”