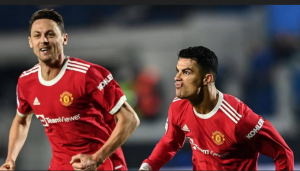 Atalanta manager Gian Piero Gasperini has admitted that his side were unable to stop the “incredible” Cristiano Ronaldo from snatching Manchester United a Champions League point.

The hosts twice led in Bergamo on Tuesday thanks to a goal and an assist from Duvan Zapata.

Either side of Atalanta’s second, Ronaldo equalised just before half time.

However, Zapata put his side back ahead after 56 minutes.

Despite then sitting back to protect what they had, the Serie A side looked to be resisting United’s advances.

However, Ronaldo produced a pinpoint volley in stoppage time to snatch Ole Gunnar Solskjaer’s side a draw.

Asked in his post-match press conference how frustrated he was.

“It looked like they were all out of puff but we came up against an incredible player tonight.

“We can still make it through. It is still in our own hands.

On Saturday we equalised in the last minute against Lazio, that is part and parcel of football.

“We deserved to win tonight but we have to accept the result.”

United’s point moved them to the top of Group F on goal difference ahead of Villarreal, who beat Young Boys 2-0 in their match on Tuesday.

Solskjaer’s side face Villarreal next in Spain in a crucial encounter, before Young Boys travel to Old Trafford for the final match day.

Gasperini went on to reveal he jokingly told Ronaldo to “go to hell” in a post-match chat with the 36-year-old.

“Ronaldo? What can I say, it’s incredible, crazy, he never pulls out,” the manager said.

“Some even managed to say he was a problem, imagine Ronaldo as a problem!

Ronaldo has effectively won United all seven of their Champions League points so far.

His equaliser against Atalanta followed his winner against the Serie A side at Old Trafford and his last-gasp goal against Villarreal.

United face Manchester City on Saturday next, but Paul Scholes admitted he has a bad feeling about the match, just as he did ahead of the 5-0 loss to Liverpool.