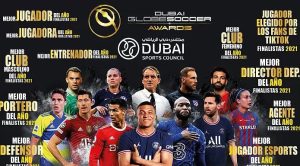 MARCA are the official newspaper for the Globe Soccer Awards 2021, and the finalists have been chosen by some five million fans.

The results will be released on December 27 during the awards ceremony, which takes place in Dubai.

Cristiano Ronaldo, Lionel Messi, Kylian Mbappe and Karim Benzema are some of the named finalists for men’s awards, with Alexia Putellas and Lucy Bronze amongst those up for the women’s awards.

The Dubai Sports Council will host the event.

Who has been nominated?

Those are the six candidates for the Best Male Player of the Year award.

The Best Female Player of the Year award.

Across 12 categories, there are several Spaniards who are up for a Globe Soccer Award.

Atletico Madrid are up for the Best Men’s Club along with Al Ahly, Al Hilal, Chelsea, Flamengo and Manchester City.

Cesar Azpilicueta (Chelsea) is competing for the Best Defender award, while Txiki Begiristain and Roberto Olabe are up for the Best Sporting Director prize.

A second round of voting opens until December 20 at vote.globesoccer.com to choose the winners.

An international jury is made up of coaches, directors and club presidents.