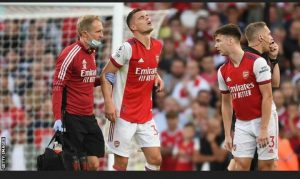 The Switzerland captain Xhaka  will out of action for 3month Arsenal said he has a “significant injury” to his medial knee ligament.

Granit Xhaka was replaced after 82 minutes in the 3-1 win at Emirates Stadium.

“A specialist consultation took place on Tuesday evening which has determined that Granit does not require surgery.”

He missed the two part of his three-game suspension following a red card against Manchester City on 28 August.

He was in Mikel Arteta’s side as the Gunners continued their recent revival against north London rivals Spurs.

But he was caught by Tottenham forward Lucas Moura late on and limped from the field.

And we are aiming for him to be back in action in approximately three months.

“Everyone at the club will now be supporting and working hard with Granit to get him back on the pitch as soon as possible.”