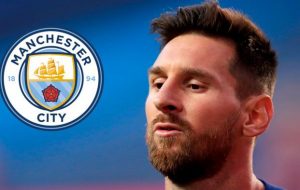 The former Blaugrana boss has been heavily linked with the Argentine superstar for some time, and he is now up for grabs after leaving Camp Nou

Pep Guardiola has been quizzed on Manchester City’s reported interest in Lionel Messi now that the Barcelona icon has hit free agency and will not be signing a new contract at Camp Nou.

Discussions regarding fresh terms at Camp Nou for the six-time Ballon d’Or winner have broken down, with financial difficulties in Catalunya preventing a deal from being put in place.

A scramble is now being sparked for the most sought-after of signatures but City, who have just broken the British transfer record for Jack Grealish, are not planning on joining that battle.

Guardiola, who spent four memorable years working with Messi at Barcelona between 2008 and 2012, said of the speculation suggesting that he could look at putting a reunion in place: “We spent £40m on Jack Grealish. We paid £100m and brought in £60m.

Why is Messi available?

An all-time great made one push for the exits in 2020, which sparked talk of interest from City, and hit free agency this summer when his lucrative contract expired.

Barca had hoped to put an extension in place, with club president Joan Laporta agreeing terms at one stage, but no paperwork can be signed and a record-setting spell at Camp Nou is being brought to a close.

Guardiola added on the best player he has had the pleasure of working with: “It looked like it finished well in terms of him continuing with Barcelona. It was a surprise for everyone – me included.

“The president was clear today. I didn’t speak with the player or the president so I don’t know what has happened but as a supporter of the club I would love for him to have finished there, but today the club needs to be sustainable and what happened in the last year was really not good.

“As a fan, I have incredible gratitude for the most extraordinary player I have seen in my life, for the titles he helped to [win for] Barcelona, to help me personally to go to Munich and then to England.

“More than that, the incredible amount of feelings and actions in front of the TV and watching what he can do with the ball, with his mates in one football game.

“Day by day, game by game, every three days he made something unique. All I can say is thank you so much for bringing Barcelona to another level, to allow Barcelona to dominate the world for a decade, and I wish him the best for the last few years of his career.

“He will not be forgotten. Hopefully one day we can say the best ever because he deserves it.

“If president Laporta arrives in this situation, he should do it unfortunately because someone before didn’t do well.”