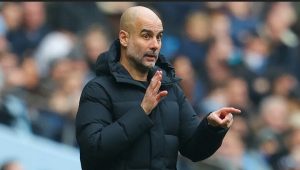 The Netherlands would like to hire Pep Guardiola when he leaves Manchester City, with the KNVB keen for the manager to bring ‘Total Football’ back.

Guardiola‘s current City contract runs until summer 2023 – the end of what will be his sixth season at the Etihad.

To date, Guardiola has enjoyed a pretty successful tenure at the Etihad.

At the weekend the City boss also reached the 500 Premier League point mark – becoming the fastest ever manager to do so.

Due to all of these accolades, according to the Sunday Mirror, the KNVB see Guardiola as the perfect man to replace Louis van Gaal in the Dutch hot-seat in the future.

The Netherlands had enquired about Guardiola‘s availability prior to the manager signing a two-year extension with City last August – being told that he had ‘unfinished business’ at the club.

City are confident that something similar will happen this time around too.

Guardiola is clearly very settled at the Citizens, and the club owners are confident of the Catalan signing another contract extension in the future.