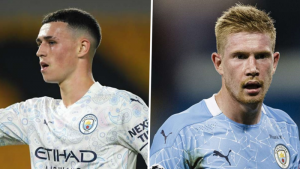 The Spanish manager will be without two midfield stars for the Community Shield after recently signing another.

Kevin De Bruyne and Phil Foden will be out for “a while”, says Manchester City boss Pep Guardiola.

Foden left England duty on crutches as he missed the Euro 2020 final due to injury, while De Bruyne is also dealing with an injury suffered during the tournament with Belgium.

The England midfielder is expected to miss both the Community Shield and the start of the season, while De Bruyne may be back in time to face Tottenham in City’s first Premier League game.“Phil will be out for a while, a tough injury, we have to be careful with it,” Guardiola said.

“Kevin still is out. I think he will come back a bit sooner than Phil apparently. But both are still out for a while.”

Guardiola went on to say: “Today, the managers in the big clubs, there are many internationals – we cannot work. We are here to handle the team spirit as well as possible, that time when you have four or five weeks to prepare.

“Half of the team is out and we don’t complain. It’s a pleasure to play the Community Shield. I’m lucky in the sixth season and my players know what they’ve to do.

“So difficult, the schedule is crazy, so tough.”

While Foden and De Bruyne are set to miss time, City have recently added another midfield star in Jack Grealish.

Upon his unveiling, Grealish revealed how excited he is to play alongside De Bruyne and Foden, saying that the former is up there with Lionel Messi and Cristiano Ronaldo among the world’s best.

But Guardiola, who confirmed the club’s interest in Harry Kane on Friday, says the former Aston Villa midfielder isn’t quite ready to start as he’ll need time to adjust to life at the club.

“He’s not ready to start – one week training alone – but he’ll travel and be on the bench and we’ll see what happens,” Guardiola said.

“Normally top players adapt quick to physicality, he has to understand. Maybe I’m wrong and we cannot help him – but I’ve a feeling he knows what he has to do.”