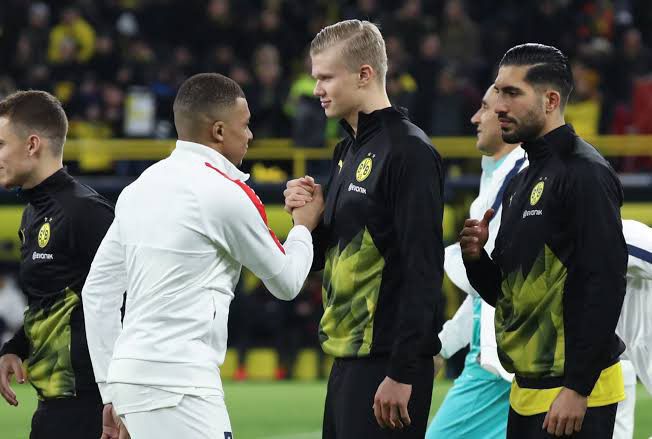 Erling Haaland has played down his so-called ‘rivalry’ with Paris Saint-Germain forward Kylian Mbappe in a fascinating new interview.

The Norwegian , who has scored 24 goals in 19 games since joining City from Dortmund in the summer following his highly-anticipated £51.5 million summer move to Manchester City.

And as a result of his fine form, many are touting Haaland to ignite a Messi & Ronaldo type-rivalry with another top forward – Kylian Mbappe.

I think you need to be your own player when it comes to that so I don’t like to compare or anything with that.”

“I think the media has been doing that with Ronaldo and Messi for the last 10 years and I think they’ve been pushing each other as well.

I think it’s been a positive thing. Barcelona and Madrid against each other. It’s been the perfect rivalry.

“But I don’t think about this [rivalry with Mbappe], honestly.”

Kylian Mbappe made it clear last year that Haaland isn’t quite on his level yet, saying he needs to show more longevity before being labelled football’s next big star.

“It is his second year, we are getting to know him. It is the beginning for him. I’m happy for him, for what he’s doing.”

“In all humility, I don’t think everyone is capable of changing positions like this every year and maintaining a great performance at the highest level.

“That did not fall from the sky. If I talk about the baggage that they gave me in adolescence, it’s all there.

“I have managed to work on my weak points, but above all to perfect my strengths, because they have always told me that it is through your strengths that you are going to win.”

Mbappe netted a hat-trick in the World Cup final last weekend, even though it was unable to prevent France’s from lifting the World Cup.

Meanwhile Haaland made a goalscoring return in Manchester City’s first competitive game since November as they defear Liverpool on Thursday night.