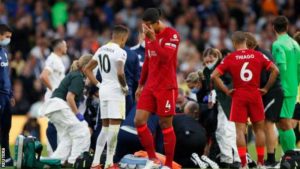 who was shown a red card in the 60th minute as a result.

Liverpool team-mate Mohamed Salah immediately called for the medical staff and covered his eyes in distress.

Elliott was clearly in pain before he was taken off on a stretcher.

The former Fulham teenager posted a message on Instagram as the game ended.

saying he is “on the road to recovery”.

Belgian centre-back Struijk, on as a 33rd-minute substitute for the injured Diego Llorente.

He was consoled by Liverpool’s Virgil van Dijk while Elliott received treatment for what appeared to be an ankle injury.

He applauded the fans while being carried off and taking on oxygen.

Elliott, who made his Liverpool debut in September 2019,

has featured in every game for Jurgen Klopp’s side in the Premier League so far this season.

The Reds were leading 2-0 when he was replaced by captain Jordan Henderson and Sadio Mane added an injury-time third goal.