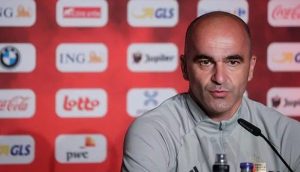 Belgium coach Roberto Martinez has expressed his sympathy for Eden Hazard, whose career seems to be in freefall.

The 30-year-old winger has been beset by injuries during his time at Real Madrid and his national team coach has revealed the torment going on behind the scenes.

“He is someone that has been a part of winning teams, but he just can’t get any rhythm at the moment [because of the injuries].

“Everyone talks about him, but no one really knows the truth.”

For Belgium – though they lost to France in the UEFA Nations League semi-finals in October.

It has been a happy period, with the Red Devils qualifying for the 2022 World Cup in Qatar having topped their group, going unbeaten in the process.

Read Also: Edouard Mendy Complaint Over Use Of His Image In Stories About Benjamin Mendy

“We needed that game [against France] to prepare ourselves for the World Cup.”

Martinez on the Barcelona links

Martinez – a Catalan – has tried to keep his head on that job with Belgium, but admitted he has heard of the speculation around a possible job with Barcelona.

“There was never an offer.”

“In recent years I have heard the rumours, but I have been focused on Belgium.”