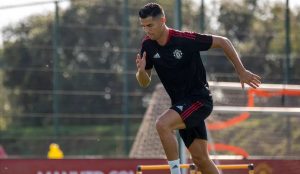 The Red Devil’s Boss  Confirms  the Portuguese legend will feature for,

Manchester United against Newcastle on Saturday, but the manager never sure if  the forward will start.

Ronaldo has been training with the squad since being released from quarantine,

he will be on the pitch at Old Trafford on Saturday.

“He’s been good,” Of course, we’ve followed his career from afar since he left here.

I think everyone’s very, very happy to have him back.

He can speak for himself but he seems happy to be back as well. The mood’s been very good,

“He’s been having a good pre-season with Juventus, he’s played for the national team,

he’s had a good week with us here.

He’ll definitely be on the pitch at some point, that’s for sure.”

The signing of Ronaldo has bring  United into the Premier League title mix,

Solskjaer feels the Portugal star brings a new dimension to the team.

“Everyone evolves and develops throughout their career,” Solskjaer explains

“Cristiano is a different player to one who left but he’s in such good nick still and he will be looking,

in the next few years to play as much as he can, to score as many goals as he can,

he’s a threat from direct set-plays himself, but also to be on the end of crosses and he’s adding something extra.

“We don’t have his skill-set in the team, the mix of his.

No one has, really! He is one of the best players that’s ever played the game.”

A further boost for United is Jadon Sancho has been passed fit after withdrawing from the England squad due to injury.

“Jadon has come back in and trained the last couple of days,”

“He’s disappointed he couldn’t play for England but determined to be fit and he’s available. That’s a positive.”