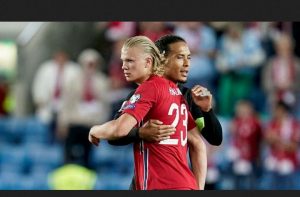 between Norway and the Netherlands on Wednesday.

Haaland opened the scoring before Norway were pegged back, and claims to have been,

responsible for a rival being forced to take a painful break early in the second half.

“I think I broke Van Dijk’s finger. He came up to me and said, ‘Damn, I think you broke my finger.’ He’s good, so to speak. I have no idea how it happened.”

Van Dijk was forced to the touchline shortly after the interval, clearly in some discomfort.

He was checked over by the Dutch medical team, who appeared to snap the little,

finger on his left hand back into place before taping the digits together.

The physio team announced afterwards that Van Dijk had broken no bones, with it now reported he suffered a dislocation.

Either way, no lasting damage has been suffered and the 30-year-old defender,

will be raring to go in the Netherlands’ upcoming home dates against Montenegro and Turkey.