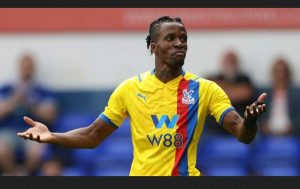 Crystal Palace forward Wilfried Zaha has revealed the reason he keeps “moan” on the pitch when his side is in action.

The winger has enjoyed a good start with Palace in the Premier League,

and last weekend he scored from the penalty spot as they beat TottenhamHotspur 3-0 in the London derby at Selhurst Park Stadium.

Ahead of their next fixture against Liverpool on Saturday.

A player who has managed 360 minutes under new manager Patrick Vieira’s campaign this term, has stated he always tries to lead by example.

“People see me moaning on the pitch it’s just because I’m passionate.

“It’s not moaning for the sake of moaning, I just demand from my team.

I demand the best from the team that’s why I go around moaning,

and it seems negative but it’s like ‘I know we’re better than this, I see you lot week in, week out.

“I don’t care who we’re playing against. I’ll still get it in a tight position and try and get out of it.

It’s difficult at times but once you get on the pitch I just get on with it.”

Ahead of their trip to Anfield, Vieira had admitted it will be a difficult challenge for his side and his team will need 100 percent belief and confidence to get something.

“Going to Anfield is going to be really challenging but there is no fear.

There is the excitement of playing one of the best sides in Europe,”

“It’s going to be challenging, difficult, but we’re really looking forward to the game.

Because we want to challenge ourselves against those teams.

“I think you are talking about one of the greatest teams in Europe, not just in the Premier League.

If you look at their record in the last couple of years it’s up there with the best.

We know their strength, what their front players are capable of doing.

We know them well. We can’t be surprised by the way they’re performing week in, week out.

“We just have to go on the field with performing and give them problems.

Because there are also sides we can exploit. To exploit it we must be brave and go there thinking we can get something from the game.

If we go there thinking about defending for 90 minutes, they will score goals because they have the ability to do that.

“We need 100% belief and confidence. If not, there is no point going there,

because we know it will be tough and challenging but these are the kind of games you want to be involved in.”