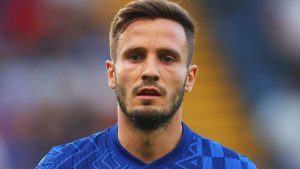 against Aston Villa, but the manager took responsibility for the circumstances.

He picked his line-up thinking the midfielder would be able to adapt right away to the,

pace of play before replacing the Spain international at half-time of a 3-0 win.

Saul, on loan from Atletico Madrid, did not train in pre-season with the Blues as he arrived just before the transfer deadline.

“I had the feeling that he struggled,”

“There were some big mistakes, passing mistakes, and he struggled with the intensity.

You could see he isn’t fully adapted.

“It’s completely my responsibility. I had the feeling he could jump in for us and play at that level.

I [then] thought it was maybe better to change him, but it doesn’t change anything [about how I see him].”

“It’s very hard. You can either do it or not do it. I told him before it was my responsibility,

if it does not work out for the matter of your life.

He struggled a bit, created some half-chances for Aston Villa.”

Saul vowed to improve upon his play in La Liga, where his form had dropped in recent seasons.

“I want to go back to being the Saul that I want to see,”

he told Ibai Llanos on the streaming platform Twitch.

“I don’t want to see the Saul that you’ve seen these last two years.

I was very frustrated not being able to show people what I am capable of.”

Saul has come to Stamford Bridge as a star with big-game experience who nonetheless faces questions about his ability to return to highest levels.