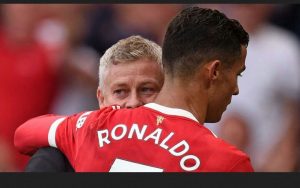 But, his manager said he will have to be careful with his workload.

Ole Gunnar Solskjaer said Cristiano Ronaldo will not play every game for Manchester United as he looks to manage the forward’s minutes.

Ronaldo got off to a flying start with a brace against Newcastle on his second debut for the club.

It  shows that it could be difficult for Solskjaer to leave him out of his lineup.

But, the Norwegian insisted there will be games Ronaldo will skip as he looks to keep the 36-year-old fresh.

Read Also: Giorgio Chiellini Tipped Dybala To Be A Leader After Ronaldo Exist

He was asked if it is impossible to leave Ronaldo out after his double at Old Trafford on Saturday.

“The thing with Cristiano is that he looks after himself so much.

So I know he will recover quickly and he has had a pre-season.”

“Of course there is a game on Tuesday (against Young Boys).

We will see what we do. But no, it’s not impossible to leave him out.

And I have to manage a 36-year-old’s minutes as well.”

“The more quality you add to the group and the more healthy competition and leaders who they look up to,” Solskjaer said.

Because, they are winners, they have won everything there is to win and they put demands on themselves.

Which the young boys, the rest of the team, they look at them and think: ‘That is how you stay at the top.’

“So it is only going to be good for everyone and there is competition for places which is great for me to see.”

The squad fly to Switzerland on Monday ahead of their first Champions League fixture of the season.

They will play Young Boys on Tuesday night in their opening game of Group F.

If Ronaldo plays he would equal the all-time Champions League appearance record level set by Iker Casillas of 177 matches.